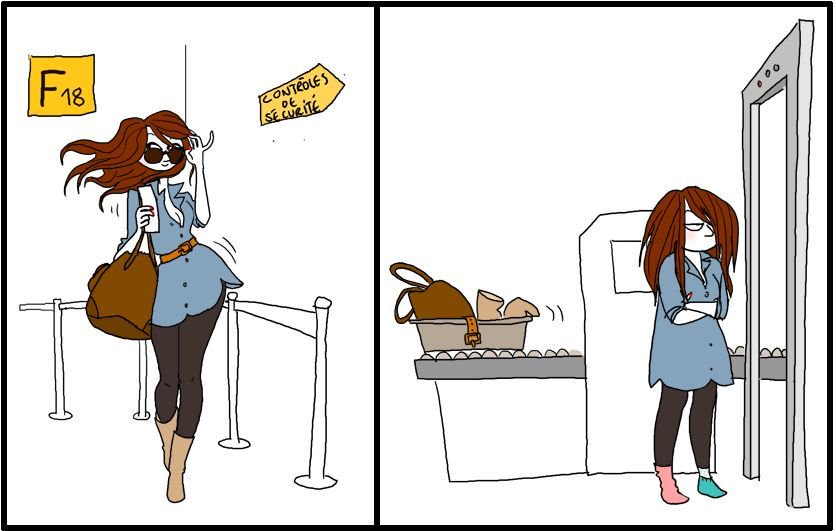 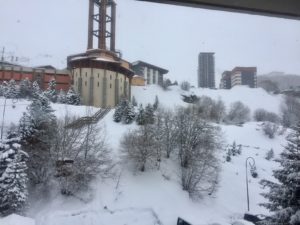 Well, as I’ve said before, sometimes things don’t go according to plan. It’s 7:45 am and I’m sitting in a little apartment in the mountains in France. My boy and his cousin have been living here for 6 weeks and I’m happy to report they are still alive, think they have the run of the town but do actually get up and go to work a couple of days a week, well money has to be earned to then go ‘down the hatch’ lol. Obviously, they are currently still sleeping.

My journey here yesterday wasn’t quite as stressfree as I’d hoped but I was adamant I was getting here, I wanted to catch up with the teens, see where they were, what they were doing and how they were surviving, get a little mountain air into the lungs, hopefully get a little skiing to move the body (it has been 4 years since the last pair of skies were on) and to be honest, I JUST NEEDED IT. Before I delve into the depths of yesterday, I do want to say – IT’S OK TO SAY YOU NEED A BREAK. At some point everybody does and some people are better at taking them than others. There can be millions of reasons why you may need to give yourself some time out and it might just be shutting yourself in your bedroom with a book or trashy mag or a guided meditation or nada, or locking the bathroom door and going for a wee without kids, dogs, partners following you to ask boring and irrelevant questions or just watching (dogs that is, not partners – ooohhh not my bag, if it’s yours, be my guest) or it might going out for a coffee or it may even be buggering off for a weekend.

Anyway as I was saying, you ARE allowed to give yourself timeout for a multitude of reasons and I’d love to say it’s not selfish but it IS and SO IT SHOULD BE. Think of little ones, they only do what is right for them and if they are made to do something else, all hell breaks loose. As adults, we spend most of our time doing things for others which is lovely and necessary but we always need to make sure WE are doing what WE need to do too. We need SPACE, we need TIME, we need to BREATHE, we need to sit in jammies and watch copious amounts of snow fall and know that there is going to be no skiing today but there is going to be Vin Chaud and yummy french food and chats with my boy and my niece.

So that is what this weekend is all about, only there were a few blocks thrown at me yesterday on my journey to get here, but no matter what they were, I did everything I could to bulldoze through like ‘It’s a Knockout’ or ‘Total Wipeout’ and possibly even a little ‘Takeshi’s Castle’ (the Japanese version – seriously you have to watch 5 mins of that one, hilarious – you only need to watch once though or you’ll cry). And I did it with minutes to spare lol. 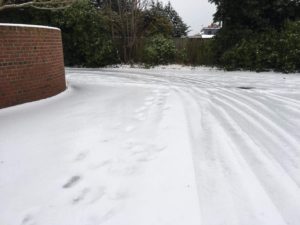 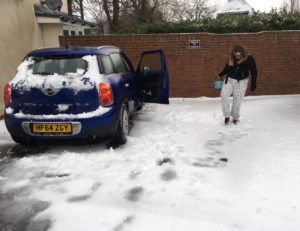 Except for this year, IT DID !  It took 40 minutes of countless kettles of boiling water with the girl helping, to even open the doors to my car let alone get the inch thick ice of the windscreen,  a big fall on my arse, the neighbors out in their jammies helping push Ziggy the Mini with me in it out of the snowy driveway and a whole lot of ‘I AM GOING’ to actually get away from the house. Ps thats pure ice at the bottom left of the pic, not clear driveway.

10:45am hit the very outskirts of London – still fine on time, GPS says airport 30 mins away

I had left loads of time to get to an airport I hadn’t been to before (flight days worked better than the local one) however, as I reached London, the GPS on my silly 3 years old (in human years, 103 in Phone years) phone started sticking and stopped working.  Needless to say not knowing where the airport was as never been before, mixed in with not knowing London and not printing any paper directions as was trusting the phone, the slight panic set in. ‘Universe, I know it’s time for a new phone, thanks for pointing that out at this marvelous time’.

So, after a little cruising round who knows where and why would I plausibly think a sign for Luton airport would be ANYWHERE near where I was, I got so myself even more lost. So, what to do,  I pulled the positive pants up to my armpits, talked myself down off the airport control tower roof (if only I knew where the friggin’ airport was) and found a way.

11:30 am pants firmly pulled up but airport now 55 mins away

I managed to hot spot the girls’ old phone (if you don’t know what that means, ‘where have you been?’, go find out, you might just need it one day like me, am currently hotspotting my boys’ Mac with my phone writing this as he’s too tight and 19 to pay for inet – didn’t I do well not bringing my own lappy, only to find his and work lol), that thankfully I had brought with me to switch mine over at some point but had no chip in (what, oh yes we’re talking about the other phone, ‘Elaine, your grammar is atrocious’). I managed to wiggle my way through wherever the heck I was on the outskirts of London, finally see a sign for Luton airport and get to the airport car park.

Of course, I didn’t go to the right car park, that would have been way too easy, so a bit of Anneka Rice dash in, out and back in the car holding the ‘get out of carpark free’ card in my teeth and apologising to the car park people that I hadn’t chosen their car park, to then find the actual car park further down the road that had my booking (and didn’t look quite so organised – hhhmmm, now who was being tight?). I did very well to slow my pace to a mild sprint from the abandoned Mini and in to the office, where one look from the lovely man behind the desk at me, he said ‘Booking under Luck’, how could he tell?, I was only 2 hours later than I had booked and yes, he did have my flight details so knew the timing wasn’t shit hot!!!! I took a huge breath (much to his amusement) and did really well not to shout “Can we PLEASE just go, I’m really late, I HAVE TO GO”. But no, we had to wait just a wee bit longer for more bodies to fill up the minibus – aaaggghhhh.

So we got there, I jumped from the van, grabbed my bag and RAN – note to all – Ugg boots are not made to run in. A mad dash was made to the counter, bag dropped, boarding pass received, ran to security – ‘I’ve done it, hallelujah, I’ve made it’ – and obviously whose bag did they stop – Oh Yes MINE ! I WAS starting to question the lovely universe at this point and think, is there a reason I shouldn’t be going? But f’ it, I’M GOING. My bag was stopped as I hadn’t taken the ridiculously small plastic bag of lippy and perfume out of my actual handbag and put it in the tray. 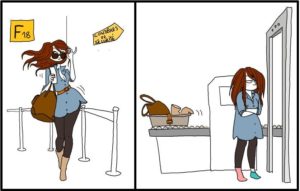 Lovely though he may have been, the security man started to ask why I had an empty bottle of perfume in my bag. ‘Really, now you want to chat perfume’. I explained as any female would do, that there was a tiny drop left that would be perfect for 4 days away, I’d finish it while away and throw the bottle in the bin, thereby making it a necessity for me to buy a new one on the way back, not sure what’s tricky about that. Anyway the lovely security man was only doing his job and a fine one they do so more deep breathing was had whilst everything went through the scanner again.

And… hey presto, I ran and just as I am about to leg it through duty-free empty handed, I take one more glance at the tv screen of departures – flight delayed by 30 mins – NOW YOU TELL ME! So, luckily for the teenagers, my Usain Bolt sprint slowed to an Elaine walk, I had a lovely chat with the cashier blokey at the till and they got their duty-free Voddie. Unfortunately, there was no sitting down with a glass of anything bubbly and some smoked salmon or even a look at the pictures in a trashy mag or even a perusal of the books at Waterstones but, we got on,  the flight left, we arrived safely and ….

Well, you thought you could go, didn’t you !!!! Oh no, of course there’s more, it very nearly ended there except for my 103 year old phone only had 7%battery, the other phone wouldn’t work with my chip, I forgot (duh) that the plugs aren’t the same as the Uk so couldn’t recharge and I very cleverly hadn’t got the address of where I was staying – ‘clever moment 1000 Elaine’ (yes I know YOU would never do that). The only hope was that the boy would be coming to meet me round about 9pm, although he didn’t actually know for sure that I had got on the flight – hhhmmm – and even with my 7%, my texts were refusing to send themselves – Brexit hasn’t happened yet – what gives !!!!

Shining armor moment, the Universe realizes, I AM NOT GIVING UP so may as well go along with me! I found the driver of the transfer minibus and bizarrely, not only came was he from the Uk, but actually came from the town where I live – how bonkers is that! Obviously, I got to sit up front with him for a natter and the spectacular views (although I did forget we were going to nearly the highest ski point in Europe and I’m scared of heights – clever moment 10001) and when he heard me say on a call to the girl when she phoned, that I had no charge on phone, he promptly took his phone out of its chargy thing that I hadn’t seen on his dashboard and plugged mine in. Ahhhh! We had some lovely chats for the next 3 hours.

The texts and what’s app started working as we came out of Switzerland and into France – weird! And the boy and niece were there to meet me when the minivan got in. They obviously required immediate feeding and watering (aka cocktails and beer) and there we have it. Today, it’s snowing a blizzard, not quite blue skies or perfect skiing conditions but I’m in France, the teens are alive and doing well, the bells are actually chiming next to us, it’s due to be sunny tomorrow and I’m going to chill!! I think there may just be 1 Vin Chaud in my future today.

So after ALL THAT WAFFLE, what on earth is the moral of the story?

YOU CAN do what you WANT to do even if it’s like TAKESHI’S Castle (go Youtube it) and you’re being bombarded with 100 challenges. People WILL help you, YOUR DETERMINATION can get you through and you CAN get to France ???.

Now Universe, the snow is lovely but some blue skies would just be perfect ?.

Have a wonderful day all, I’m going to !!